I always have wanted to make a striped hexie quilt and I finally found the perfect striped fabric.  It has colourful stripes of varying widths on a white background.  I bought 2 yards then calculated the size of triangle that maximized the number of hexies I'd get out of each yard.  I realized I wouldn't have quite enough, so I pieced together some stripes to add to each strip so that I could get a few more rows of triangles.  Most triangles have at least a colour and a white strip added.  Some are mostly added strips with only an inch or two of the original fabric. 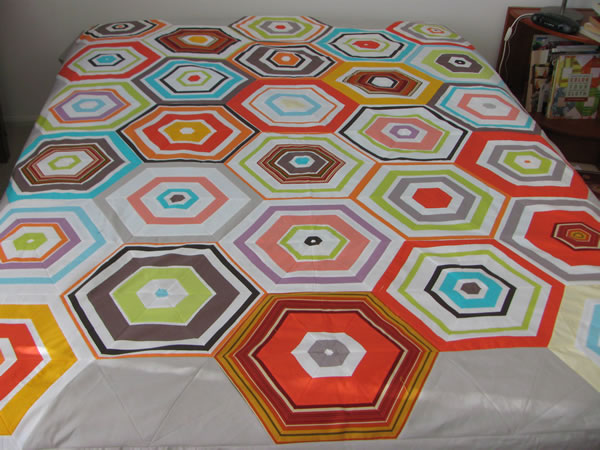 I had problems deciding how to edge the quilt.  I didn't want to cut off the side hexies to straighten out the quilt, and I didn't want a pointy edge either, cause how do you pull that up to your neck?  I finally decided to edge it all with a light grey, so now the hexies are laying on top of a grey field.  I think it actually looks really good.

I'm thinking about the back now.  Maybe a giant hexie coming up from a bottom corner that takes up about a third of the back?  Maybe I'll make the stripes out of solids.

I got to show this off at the guild anniversary meeting in the park.  We had our meeting outside and brought a picnic  to eat during the meeting.  There were 4 bands that showed up while we were there that set up under trees and jammed all evening long.  I didn't know that was a thing here in Vancouver.  I guess they just get together and jam in the park.  A friend of mine wandered by looking for her ukelele group, so that was even another group somewhere jamming in the park.