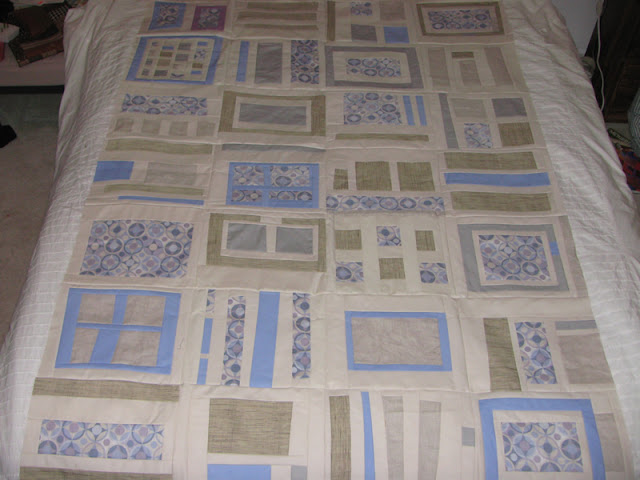 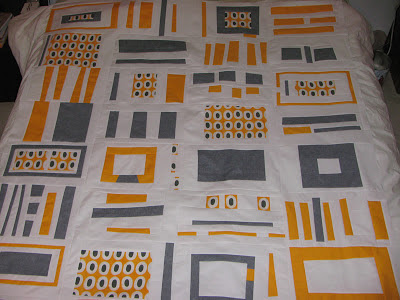 I got off the waiting list and am now going to take a fabric dying workshop with Malka Dubrawski, the designer of the yellow print, at Quiltcon!  I'm so excited.  How am I going to travel with a cardboard box, a paring knife, a potato, a carrot, a green pepper and a stick of celery?  That's what's on the supply list for the workshop!
Posted by Paul at 8:30 PM 2 comments:

I actually made a back, then quilted and bound the jeans quilt.

Here's a look at the process. 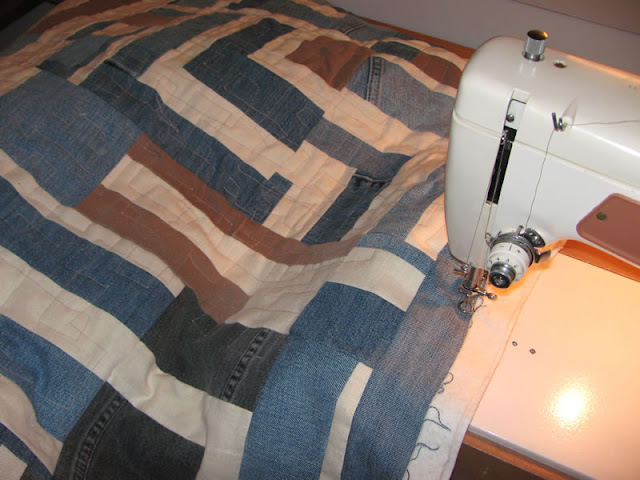 I did a square overlapping stipple and tried to go over as many seems as I could to stabilize the fabric and hold those thick seams down.

The back is a warm flannel in a brown and cream hounds-tooth pattern.  I included a pieced strip of jeans off centered for a graphic punch. 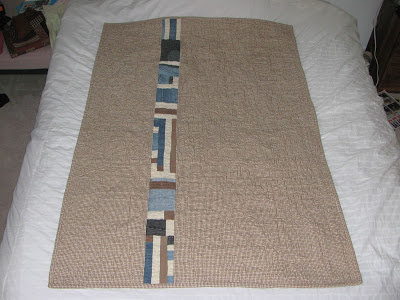 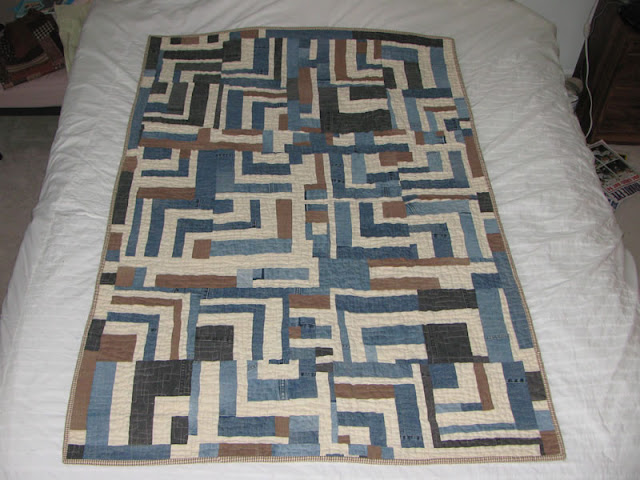 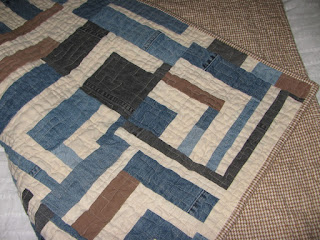 It's really heavy with all those jeans.  The flannel back helps to soften it up and I think it's the perfect compliment to the front.

I'm giving a workshop on this technique this upcoming weekend to the Vancouver Modern Quilt Guild.  I've made some demo squares in green, gold and black - trying out a circuit board look.  We'll see what it looks like when I cut the blocks in quarters and rearrange them.

So, what should I call this quilt?  The two name I've been trying out are:
What should I go with?
Posted by Paul at 7:22 PM 2 comments:

I figured out what to do with the gear block I made last month.

This was a challenge where we picked up a zip-lock bag of scraps that another guild member had put together and make anything at all for her.  The name of the owner of the scraps was hidden in the bag, so I didn't know who's bag I got.  Unfortunately there was a mix up on my part and I thought this bag of blue scraps was an extra so I didn't get it done in time for the meeting. 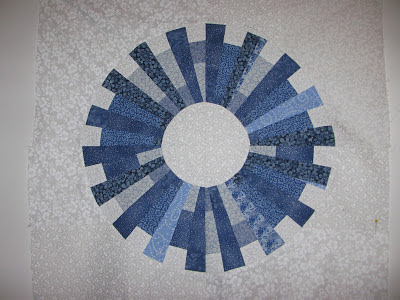 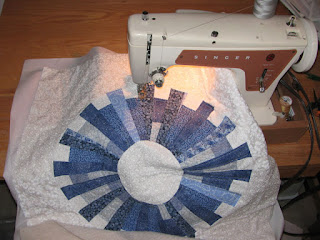 It's 24 inches square, so I made it into a really big cushion for Heather, the guild member who's bag of scraps I got.  Once it was quilted and put together, it's about a 22 inch square cushion. 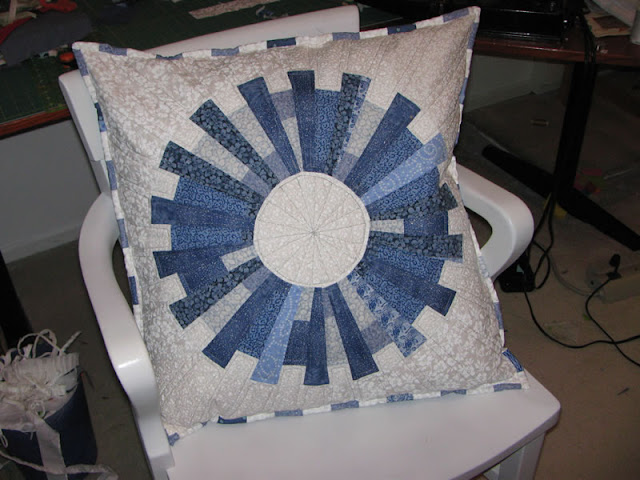 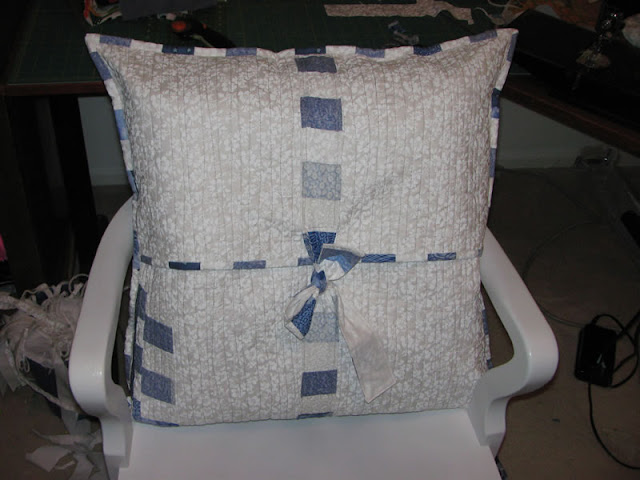 The back is an envelope style back with a built in tie to keep it together.  Once I had sewed the front and back together, I bound the edges like a normal quilt, so I didn't turn it inside out.

I used up all the scraps of blue in the zip-lock bag - even the ones I didn't like - and had to add in some of my own scraps of blue to have enough for the binding and ties.  I added all the white fabric.  It's all white on white prints from my "traditional quilting" days.  Now I just use solids, so this was a great way to use up fabric that was just sitting in my stash.  The gear side actually has 3 different white on white prints and I added in some blue scraps on the back in the lower left corner.

The lining is a poly-cotton (!) from my days working at a bias tape factory.  Really, I did one summer making bias tape and piping in a sweatshop off Main Street here in Vancouver.  I could take home the triangle ends of all the ugly fabric we used.  Now I sew a diagonal seam in it to get it back to a non bias square that I can use.

VMQG volunteered to put together a charity quilt for QuiltCon with challenge blocks supplied by Quiltcon.  Our blocks arrived and seemed to be very odd in that they were really hard to figure out a nice layout.  Here's my attempt at laying them out on my white duvet which is about the exact size that the finished quilt is supposed to be.  First, a blob 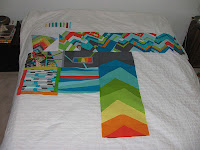 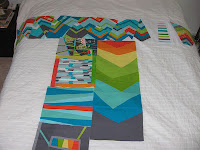 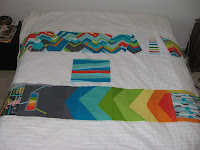 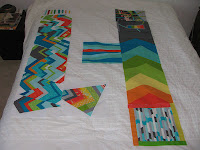 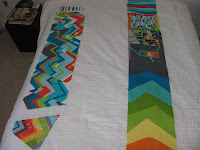 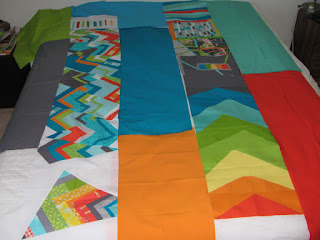 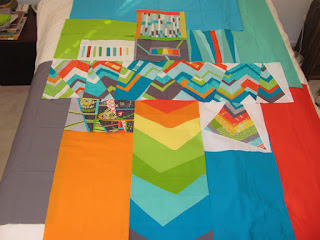 Exploded layout.  I think I like this one the best 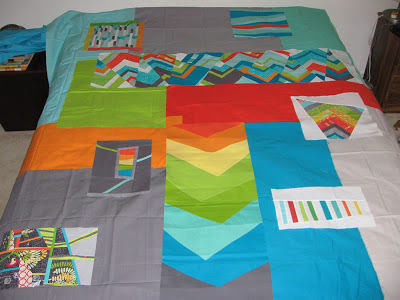 I really liked these two blocks with the thin strips of colour through them.  Especially the green and grey and orange strips. 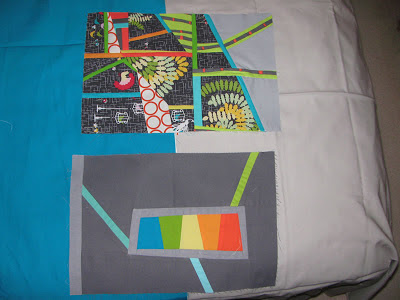 So I made some strips with green and orange and grey to include in the solids. 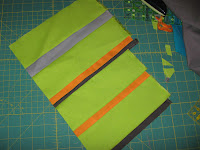 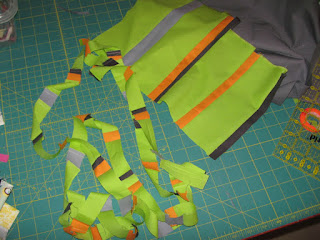 Here's the first quarter of the quilt coming together. 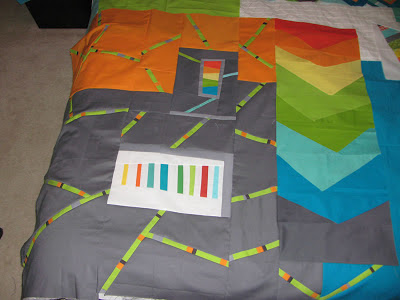 Karen supplied the fabric for the back of the quilt and had a block she made but didn't submit for the challenge, so I put it in and made one myself too to include.  That filled out the top much better. 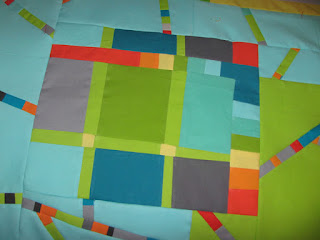 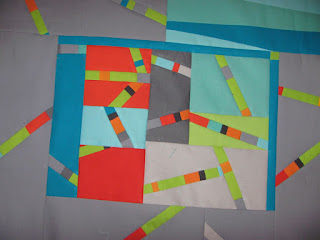 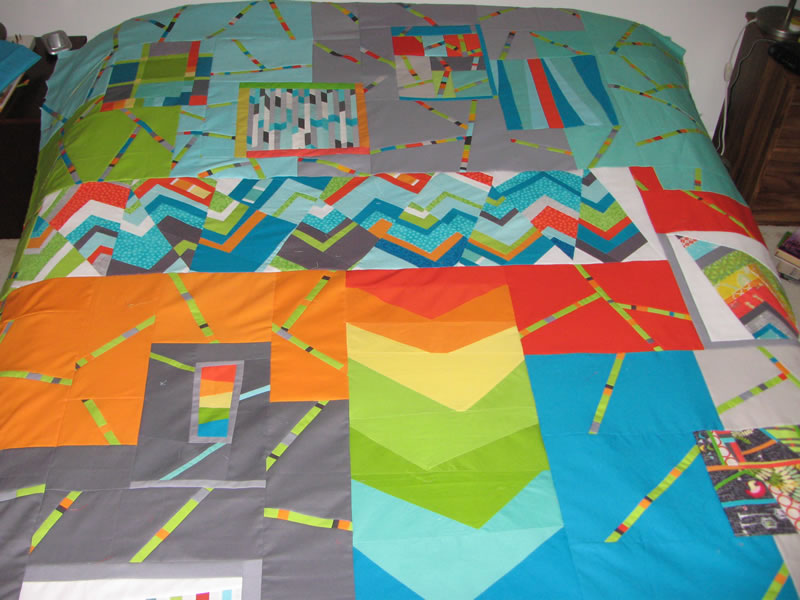 It certainly isn't what we'd call a twin size quilt either.  This is most definitely a queen size quilt up here in Canada.  I actually made it the minimum size allowed!  But as they say everything is big in Texas, so I guess it's a twin size quilt down there.

I got it done 10 minutes before leaving for the VMQG meeting, so I didn't get the back done.  However, Karen did supply just about enough of the blue fabric for the back and I added in some extra grey in case more fabric was needed.

I handed it off to Joan to quilt on her long arm quilter.  She'll then get it off to Liz to put on the binding (bright orange) and Amy is doing the label.  It should be ready for our next guild meeting, then it's off to Texas for QuiltCon. 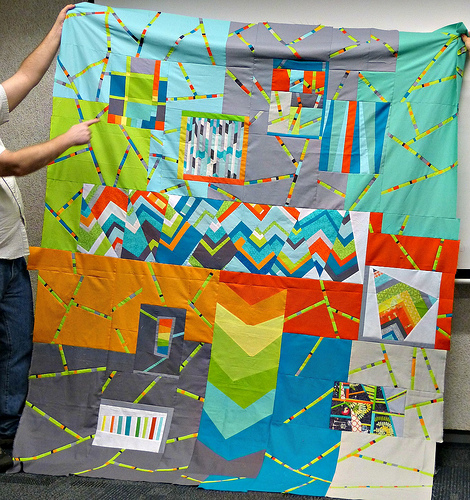 Here's the quilt top being shown off at the VMQG meeting.  I don't know who took the picture, but it's posted on Flickr by VMQG.  I'm pointing to Karen's block.  This is considered a twin size quilt in TEXAS.