Sheila and Elsie from the VMQG invited me to join their church group in creating quilted banners for their church's Parish Hall.  More about the project here: http://common-threads-125.tumblr.com/about/
A couple months ago I got in on two days of indigo dying that was fascinating.  I did some stitching on fabric, then pulling it tight to gather the fabric then putting it in the indigo pot.  I also did some clamping and some shibori where you wrap the cloth around a wide pipe, scrunch it down so it's all wrinkled, then put the pipe in the indigo pot.  You get a nice watery look.

Then after weeks of dying, I returned to collect my banner panel template.  That's the paper on the left.  You can see the red swoosh drawn in and the rules were dark on the bottom, light on the top.  I collected some light fabric and lots of dark and mediums.  There were lots of linens, some of them quite thin or very thick.  They were very hard to work with and I'm a bit worried that a seem or two might come apart over the years.  The hardest was a piece of velvet that would not stay still when you tried to sew a quarter inch seem.  Those 6 pieces are very puffed up and 3 dimensional, so I'll leave them un-quilted. 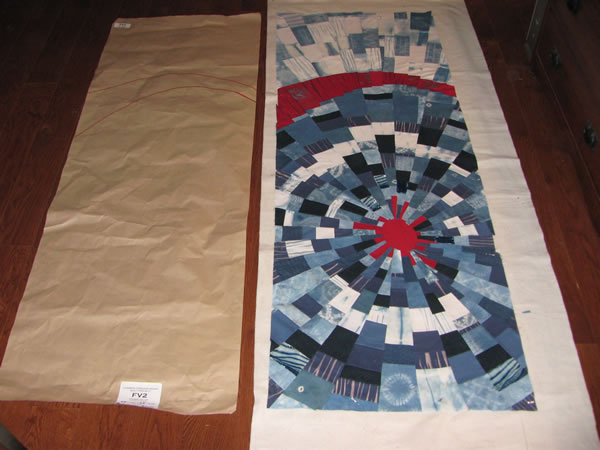 I wanted to do something with my big wedge ruler, like the big wheel quilt I did earlier, but more inprovised and explosive looking.  I got the OK to make the red part pixelated, not smooth, and got the OK to make the centre of the circle red, so here's what I did.  It's sort of an explosion, or the sun, or creation.  This panel is one that's on the east wall of the hall, so maybe it's sunrise.

It was not easy getting it to lay flat.  I actually had to sew in some darts on the edges to reduce the ruffles.  There's still one that's bugging me, but I think I can fold it and quilt along the fold to hold it down. 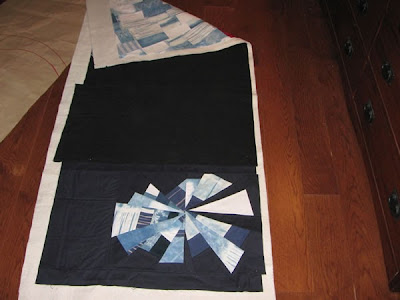 The back has some wedges that are off-cuts that hung over the edges of the template when I squared it up.  The white wedge is for the label.

Hopefully I'll have it quilted by the end of the week.
Posted by Paul at 9:00 AM