The Neighbourhood Quilt and my Quilting Buddy(s) from band

I was going through some boxes that were in storage and found my old camera and on it was pictures of a quilt I made a couple years ago.  Here it is. 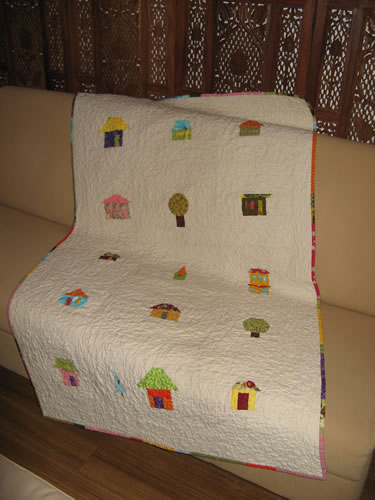 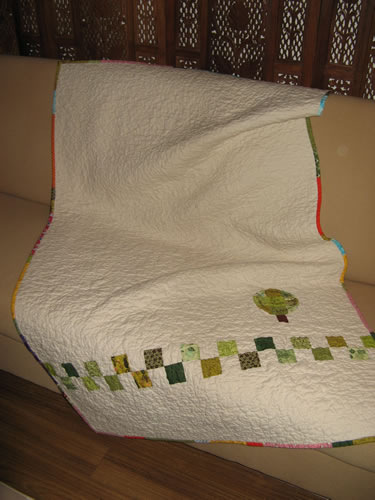 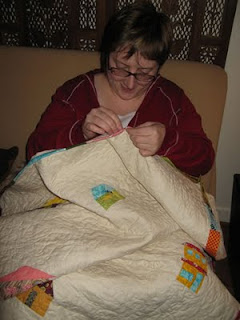 This is a good time to introduce my quilting buddy, Lawanda.  She and I are in a band together, she plays flute and I'm on the euphonium and we've known each other for about 8 years now.  She did the quilting and the binding on this quilt.  Here's her loopy quilting stitch. 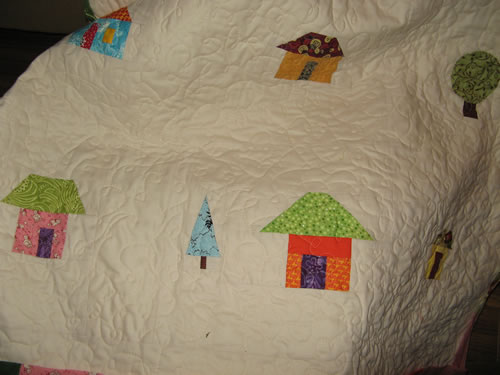 We made this one for a silent auction for the band we are in and it went for $120 at our concert!!  Here's the label we put on the back. 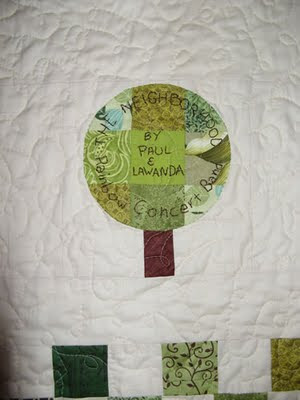 Three years ago she found out that I quilt and said she always wanted to learn how.  Within a couple weeks three other band mates and I started a weekly quilt circle.  I picked a wonky log cabin block for their first quilt and each of us went shopping and bought a bunch of fabric that were the colours we each liked.  I was very general about how much would be needed and how many fabrics to use and I opened up my stash once we all got some fabric so that we could all add more if we needed.  Lawand's fabric was browns and blues, Kenzie's was blue/purple and yellow/orange, Hisayo's was pale pink and green and mine was yellow, green and brown.

Oddly enough, all of us had a sewing machine that someone had given us, or left behind when they moved, so we had 4 machines set up in my garage.  We set up a cutting station and an ironing board that we all shared, and each had our own machine to sew with.  We cut strips of random width from our fabric then started with a square or 4 sided shape.  We added a strip on opposite sides, ironed, trimmed, then added strips on the two other sides, then ironed and trimmed again.  Then did it all for 3 or four rounds.  We ended with white strips around the entire block, then trimmed it down to a 12.5 inch square with a ruler.  Then we did it all 23 more times so we each had 24 blocks. 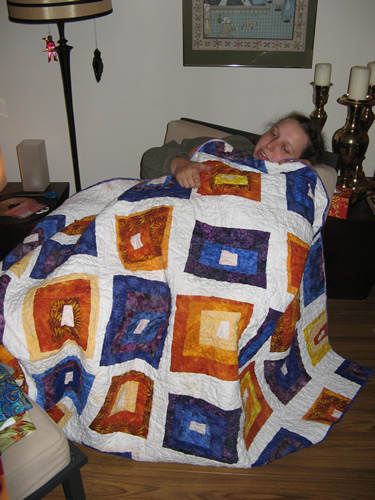 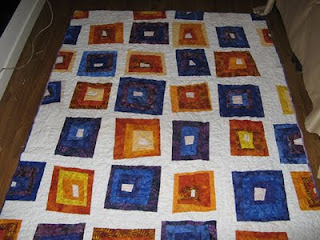 Kenzie plays euphonium too and has been in the band longer than Lawanda.  She alternated blocks of warm and cool and cut a bunch of them in half for the edge.  We had read about "engaging the edge" of the quilt and this way it looks like the quilt goes on and on and on. 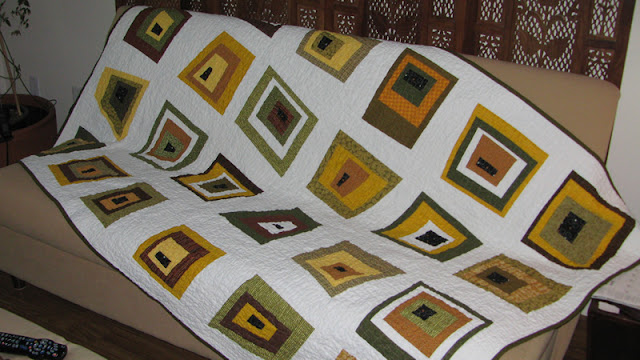 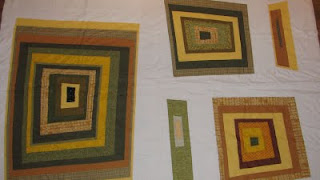 My quilt is green, yellow and brown and a little more irregular.  The back has one huge block on one half and then 4 more to fill in the space of the other half. 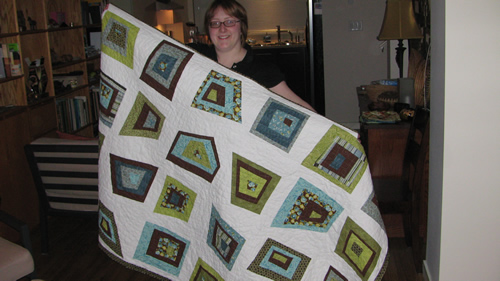 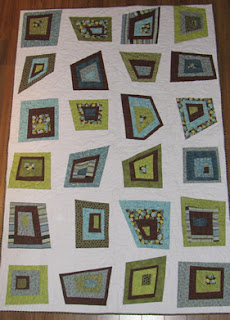 Lawanda's blocks turned out really sharp and pointy.  I think they look really retro because of the blue brown green colour scheme.  She did a staggered little blocks strip on the back so it looks like a zipper.  I'm sure I've got a picture somewhere.

I can't find a picture of Hisayo's pink and green quilt, so I'll add that later.  She's another flute player and has been in the band for 3 years now.  I'm the ancient one in the band these days (20 years now).  I joined the band a month after it started.

These quilts are a great starting quilt for new quilters.  There are no exact seams to match and no corners to line up, so new sewers don't need to worry about accurate quarter inch seams.  By the time you're making your 20th block, though, you've gotten quite good at straight lines and being consistent with your quarter inch seams.  Squaring up the blocs at the end is easy too, just put the white strips around them then use a 12.5 inch square ruler to cut off the extra and square it up.  Sewing all the squares together isn't that hard, and if you're not matching the corners too well, it's not noticed since it's all part of the white background.  There's also no sashing needed - which can be a little hard for a beginner - so if you want the quilt bigger, just add more white to the squares and square them up with a bigger square like a 16.5 inch or a 18.5 inch square.