This month's challenge in the VMQG is the modernized disappearing 9 patch.  For every block we make, we get a ticket and at the end of the meeting a winner or 2 is drawn and you can collect enough blocks to put together a quilt top.

My problem is I like making the blocks, but don't like putting the quilt together, so I usually just hand my blocks in and don't take any tickets.  Last month I handed in 10 blocks and only took 2 tickets.  There were enough blocks to have divide among 3 winners.

Most quilts with this pattern are very regular like this one I made for a nephew several years ago.  You get a bow tie effect that's on the diagonal.  For this quilt, the centre block was dark blue and the corner blocks for half the blocks were red and the other half were yellow.  The other 4 blocks were light blue. However, if you add lots of negative space in random places, you get a much more modern look to your quilt.  First make your 9 patches with your negative space blocks randomly placed in each block.  Here's 4 blocks that I made using my home batiks (the ones that turned out a bit dark or muddy). 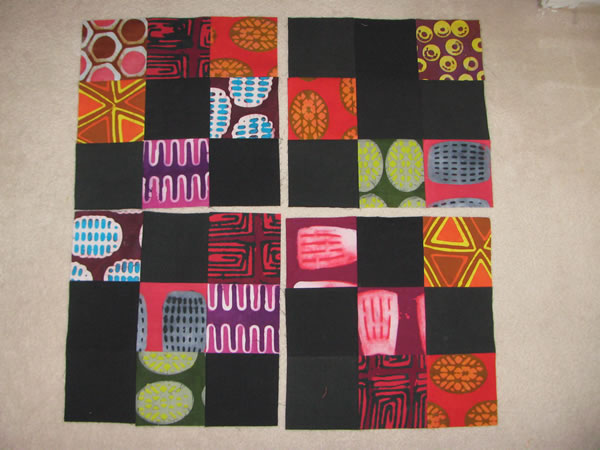 Then cut each 9 patch in quarters exactly through the centre. 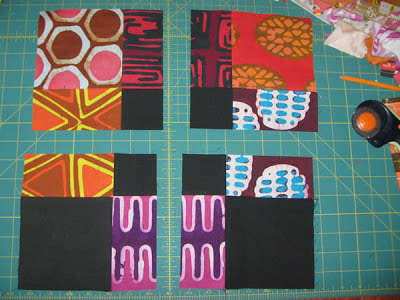 Mix them around, rotate them then put them back together and see what you end up with. 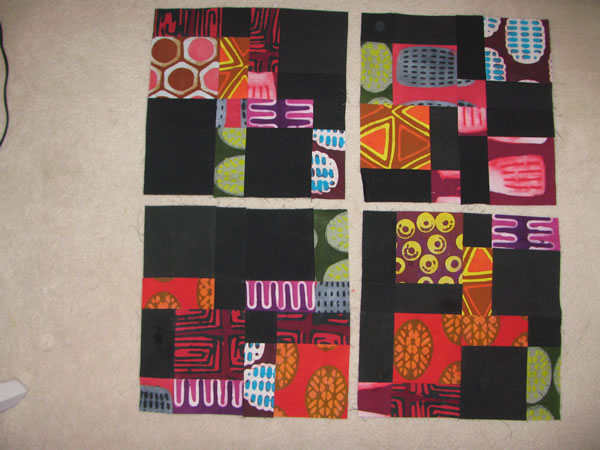 I've got some more 5 inch squares ready to put together to make some more, but will save them for Maker Fair next weekend.  I can demo the technique during the day to show people what modern quilting is like.